HomeHUNGER AND MALNUTRITION ARE INCREASING, BUT A GROUP IS TURNING THE TIDE BY BLESSING OLADUNJOYE (BONEWS) 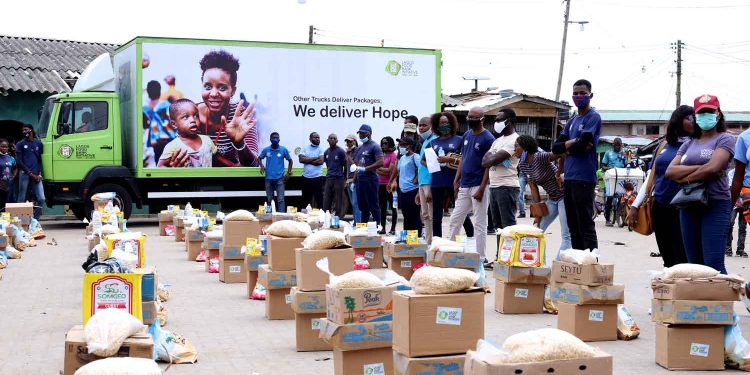 HUNGER AND MALNUTRITION ARE INCREASING, BUT A GROUP IS TURNING THE TIDE BY BLESSING OLADUNJOYE (BONEWS)

To Olufunmilayo Olajide, every day was for struggle to survive, as a visually impaired lady, who lived from one to mouth. Olajide, who is in her late 30s resides in the Lagos suburbs of Ayobo.

Because she was not able to secure a job, this visually impaired lady struggled with different psychological issues since she became blind as an adult. She would wake up every day without assurance of breakfast, let alone, dinner.

With no job; and little or no support from family and friends, Olajide preached in commercial buses and survived with the token that people gifted her after preaching.

If luck did not smile on her a day; without a ‘gift’ after preaching means she would probably go hungry.

In the 2022 Global Hunger Index, Nigeria ranks 103rd out of 121 countries with sufficient data to calculate 2022 GHI scores. With a score of 27.3, Nigeria has a level of hunger that is serious.

According to the National Multidimensional Poverty Index (MPI) 2022, 63% of Nigerians are multidimensionally poor while 40.1% of the population is poor.

Research has also shown that multidimensional poverty is higher in rural areas, where 72% of people are poor, compared to 42% of people in urban areas.

There is a connection between hunger and poverty, and poverty is a threat to food security. These are also intertwined and play some roles in the level of crime, violence, and social vices in the country.

‘Joy comes in the morning’

In December 2022, Olajide was informed by her neighbour that the Lagos Food Bank Initiative (LFBI), in its usual practice, would be giving out food items to the poor and vulnerable, specifically targeting persons with disabilities.

She was advised to visit the food bank so she could receive free food supply, that would be sufficient for her over a period of time.

Olajide did not hesitate to try her luck, as feeding had been extremely difficult for her.

While at the food bank to receive the food supply, Olajide was not surprised to see several others who were present for the same purpose. Like Olajide, some were there for the first time, while some were regular beneficiaries.

Olajide, though with several other concerns and worries, hopes the food supply continues, and that she would never have to worry about food again.

The Lagos Food Bank Initiative (LFBI) is a Nutrition-focused NGO that works within SDGs 1,2, and 3 with the aim to tackle hunger, reduce food waste, and address malnutrition.

Founded in 2016, the organisation has expanded its operations to different parts of Nigeria with 17,000 volunteers and has reached over 2 million people; women, children, the elderly, and people in informal communities.

Funmi Oyegoke, Communications Officer at LFBI told BONews that the organisation is “committed to fighting malnutrition and hunger, through targeted programs that seek to improve the nutrition/food intake of pregnant women and their infants; students in public primary and secondary schools and the youths in the underserved communities.”

To identify beneficiaries, Oyegoke said the LFBI team would visit low-cost communities, seeks out the most vulnerable, and distributes food and personal care items to them,

“For our education enhancement programme, we go to low-cost primary schools to distribute healthy meals to kids so they can continue to go to school because a healthy meal can increase a child’s ability to concentrate in class,” Oyegoke added.

She noted that there are walk-in beneficiaries who visit the food bank to collect food items, but the organization makes sure that their needs are genuine.

“There are key questions that we ask to ascertain that people are genuinely poor, and need our support,” she added.

The LFBI Communications Officer also explained that the database of beneficiaries is kept, so they are contacted whenever there are food distributions, either at the food bank or in their respective communities.

Makoko community members heading home after receiving free food supply from the LFBI team during one of its outreaches.
Source: LFBI

Adekunle Thomas, a 72-year-old retiree with 4 children is also one of the beneficiaries of LFBI. Thomas has not been receiving his pension frequently, he has his healthcare needs managed by a health insurance scheme, but his major worry is feeding.

Sharing a similar sentiment with excitement, Thomas asserted that “feeding has been quite tough, especially with how expensive things are, but this food support goes a long way.”

“This food support will go a long way. From time to time, it’s a bit hard, things are very costly. And being a retired somebody, the salary is not forthcoming any longer. I deal with health insurance from the health centre, but the food it’s very tough,” she said.

Helen Okon is a single mother of six. She sells oranges and bananas to make ends meet. The food support from LFBI, according to her, was quite helpful.

Also counting his blessings as a first-time beneficiary is Michael Onifade, a father of five in his early 50s.

Onifade, who is visually impaired explained that the food support has helped him to channel the little resources he has to other pressing needs.

“I am able to plan with the little money in my hands and use it to cater to my children’s needs. Without the food support, I would have used the money to purchase food,” Onifade told BONews.

Grace Anamelechi, Director of Strategic Partnership at LFBI told BONews that funding is a major challenge, especially with the growing rate of the urban poor, leading to an increase in the number of people the organization can cater for.

Sense of entitlement in some communities also hampers the work of LFBI as community members think they should be automatic beneficiaries.

“We have been able to engage community heads on our support to their communities, which has helped to address any feeling of being entitled displayed by community members,” Anamelechi added.

This story has been made possible by Nigeria Health Watch with support from the Solutions Journalism Network, a nonprofit organization dedicated to rigorous and compelling reporting about responses to social problems.