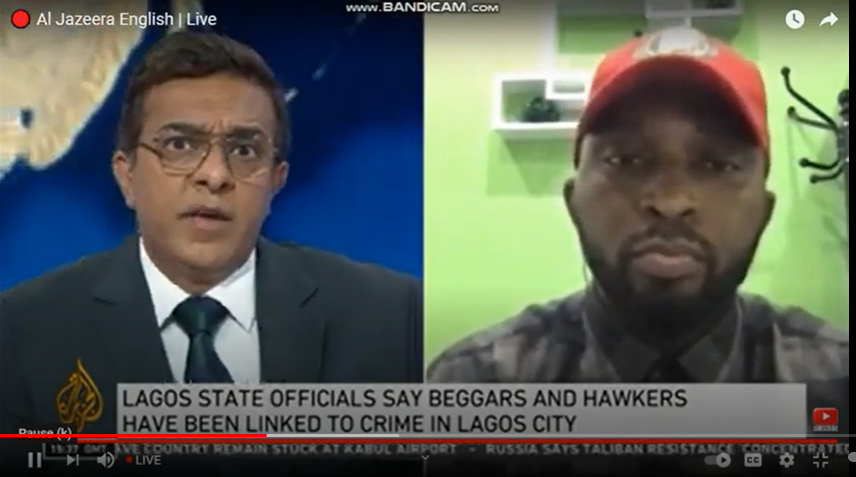 On the eve of Wednesday, August 18th 2021, the Lagos State Government released a statement
that it would enforce a ban on hawking and street begging within the state. It had set up a special
team for execution of the order and ongoing raids had commenced.
According to the commissioner for Youth Development, Olusegun Dawodu, Street begging had
become a vice and constituted a nuisance for Lagosians going on their daily activities. He also
stressed how street Hawking both by children and adults had turned to a business venture that
was causing havoc in the state in forms of security threats and impediment of free flow of traffic.
As news of the press release hit the air waves, news and media houses ran the story locally and
nationwide. The headlines also garnered the attention of international news channel Al-Jazeera
who requested a live interview on the 19 th of August, with the president of Lagos Food Bank,
Michael Sunbola to get a general sense of the impact the news had on those affected and the
average Lagosian.
The President spoke with Sohail Rahman who wanted to know what the situation was like
currently on the ground and the effects it would pose for those below the poverty line who saw
begging and Hawking as a means of survival. Mr Michael in his interview expressed his
understanding of why the ban was put in place but expressed concerns on the effect it would
have on those living below the poverty line. Michael also stressed that the Government in their
bid to curb the nuisance that comes with street begging and hawking, need to be mindful not to
criminalize poverty and homelessness as the ultimate solution is for the Government to look at
the root causes of poverty.

Sohail Rahman and Michael talked briefly on what solutions could be proposed to check the
consequent economic outcome the ban would mean to those who depend on Hawking and
begging to feed.
There is hope that the government partners with NGOs and other relief agencies to sustain the
group affected to keep them off the streets.